Tuning function in response to nutrient availability is an evolutionarily ancient cellular response. In T-cells, a cell type in the mammalian immune system, negotiating nutritional stress is critical for lineage stability and requires metabolic reprogramming.  Aligned with the goals of the RCF theme, our research is focused on identifying metabolic underpinnings of cell fate decisions (and function) in the T-cell lineage. Specifically, we seek to understand how known determinants of cell fate integrate with cellular metabolic signaling, with a focus on the regulation of cell survival.  Towards this aim, ongoing lines of research include, the identification of sentinel metabolites and metabolic sensors and the interplay with known regulators of T-cell functional fates, to query if a particular metabolic state is key for the maintenance of the differentiated fate.

Although, the importance of metabolic transitions in T-cell lineages is well established, much remains to be understood about how nutrients govern transitions critical for T-cell function and the context-specific substrate utilization in T-cell development or functional maturation. At NCBS the laboratory had explored the integration of pro and anti-apoptotic signaling in the control of cell fate decisions during T-cell differentiation (Purushothaman & Sarin, J. Exp. Med, 2009; Purushothaman, Marcel, Garg, et al., J. Immunol. 2013).  Several years ago, we had shown that signaling from the developmental regulator, Notch1, protected cells from a wide variety of stressors that trigger cell death (Perumalsamy et al., Cell Death Differentiation 2009; Perumalsamy et al., PNAS 2010).  Protective Notch1 signaling was coupled to its localization and subsequently, we uncovered a requirement for this pathway in the maturation and function of the T-regulatory cell (Treg) subset in the immune system (Perumalsamy et al., Science Signaling 2012).

While Notch activity is critical for Treg adaptation to limiting nutritional cues, our experiments have shown that the converse is also true. Thus, metabolic changes triggered by nutrient stress, are critical for localization of Notch.  These experiments originated from observations in a cell-line based screen, which identified Sirtuin (Sirt)-1, a NAD+-dependent deacetylase as a regulator of Notch activity. Sirtuins are enzymes that react to changes in energy levels and are implicated in metabolic homeostasis. Sirt1 activity controlled Notch localization, i.e. retention of the processed intermediate in the cytoplasm . Not unexpectedly, Sirt1 and NIC are detected as immune-complexes in Tregs, which is consistent with the evidence of functional interactions identified in our experiments. Further, Notch-dependent Treg suppressor activity, assessed in vivo, was also sensitive to Sirt1 modulation.  Taken together, the experiments suggest that the Sirt1-Notch interaction may constitute a checkpoint controlling Notch1 signaling and immune function.

Calcium is a well-known second messenger implicated in a wide array of signaling processes. It is not surprising therefore, that apoptotic signaling frequently correlates with changes in the levels and distribution of intracellular calcium pools. Calcium overload in mitochondria triggered by apoptotic stimuli leads to the activation of signaling cascades culminating in cell death. However, regulated uptake of calcium in mitochondria can increase bioenergetic output via the enhance activity of calcium dependent reactions in the organelle. We asked if the distribution and regulation of cellular calcium is tuned by Notch activity. Specifically, our experiments test the hypothesis that regulation of calcium homeostasis (through utilization or active removal of excess calcium) in mitochondria could be a means of altering mitochondrial activity and cellular adaptation to stressors, associated with Notch activity. The endoplasmic reticulum (ER) is the major cellular store of cellular calcium and its connections with other organelles and molecules controlling the movement of calcium are relatively well understood. We have begun characterizing the cellular calcium landscape and functions of molecules at the ER and mitochondria in response to Notch activity.  We find that Notch activity reduced free calcium in the ER store, also evident from blunted calcium release into the cytoplasm. Intriguingly, we find that Notch activity confers a dependence on the mitochondrial calcium uptake machinery for the regulation of ER calcium levels and inhibition of apoptotic damage. Our experiments include a well-characterized anti-apoptotic protein from the Bcl-2 family and are yielding intriguing insights into differing mechanisms activated for signaling survival in cells.  The cross-talk of Notch  with the cellular nutrient sensing machinery as well as sentinel metabolites in T-cells, are currently under investigation in the laboratory. 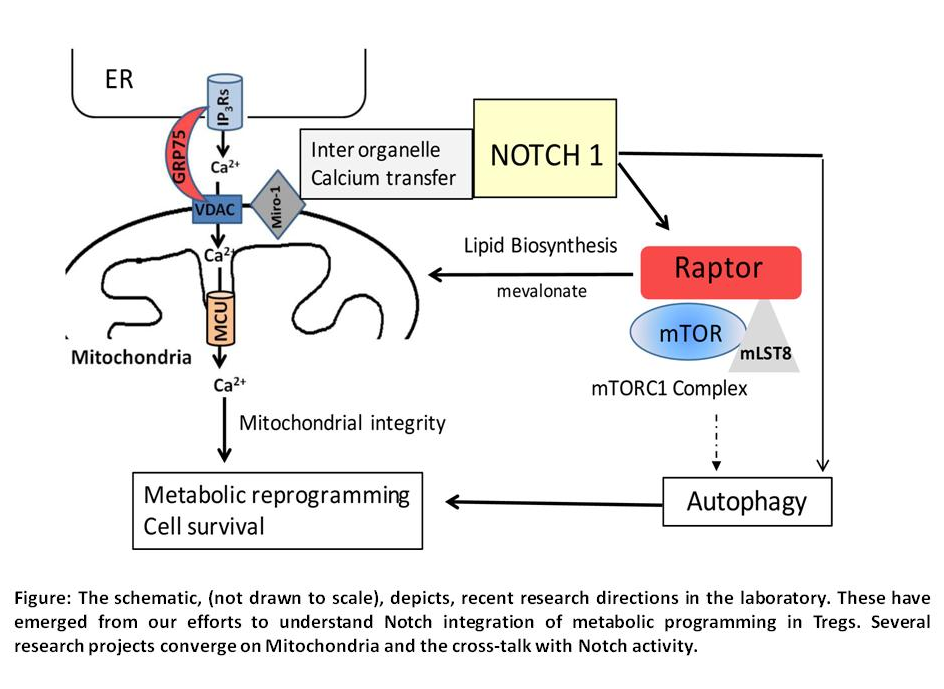 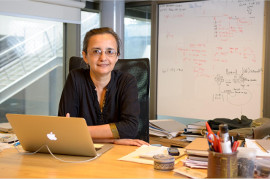